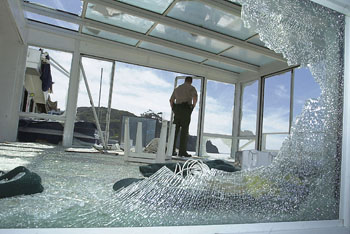 A beach front trailer at El Morro is littered with broken glass.

Destruction and vandalism at the recently vacated El Morro trailer park could prompt the California state parks department to take legal action against the former tenants, who moved out March 1, officials said Thursday.

In some of the trailers, the destruction is staggering. Graffiti covers the outside and inside of many of the beachfront homes. Inside one of the trailers, everything glass -- including the floor-to-ceiling front windows and the shower door -- is shattered, leaving a layer of shards, some two inches thick, across the floor.

"I think it's a no-brainer that some of them [the trailers] lost their value due to deliberate acts," Crystal Cove State Park Supt. Ken Kramer said while standing on the deck of what used to be one of the trailer park's nicest homes -- a spacious structure on two beachfront lots that suffered some of the most intensive damage.

The home's siding and drywall additions were smashed, and kitchen cabinets were ripped from the walls. Holes were drilled into the bottom of the Jacuzzi and the bathroom shower.

"One of the shames is that it adds extra time" to the cleanup process, Kramer said. "Any action that devalued the trailer or left a mess for the public to clean up is troubling."

Officials are investigating who caused the damage and when it occurred.

"We're still evaluating what has happened there and looking at it and adding it up," said Roy Stearns, a state parks spokesman.

The residents of the seaside mobile-home park, part of Crystal Cove State Park, reached a settlement agreement with state parks in September 2005. Under the agreement, tenants could leave their trailers and state parks would assume responsibility for the trailers' removal. El Morro has been slated for public use as a campground since the state purchased the land in 1979.

Before vacating, residents agreed "to leave the premises free of trash," according to a copy of the settlement agreement provided by Gerald Klein, the attorney who represented the majority of the El Morro tenants in their legal fight to remain at the park. Parks department officials contacted Klein regarding the damage about a week ago, and he has since seen it.

There's no doubt that some of the units are trashed, but the state may not have any legal recourse, Klein said.

"I agree that as to some of the units there's a violation, but the question will be: Is there a right to damages if the state's just going to destroy them in place anyways?" Klein said.

Both Klein and state parks officials said they don't know who is responsible for the vandalism and destruction.

"People cleared out at various times. Who smashed these windows -- I don't know who did that," Klein said.

State parks officials said they just want to move forward with the project, but the damage done to some of the trailers could draw out the process. The state has already sold the trailers on the inland section of the park to a private contractor, who will remove them from the property. So far, there haven't been any bids on the seaside trailers and it's unknown whether the damage will have a financial effect.

Last week, a contractor agreed to paid the state approximately $51,000 to remove the inland trailers within 180 days. It's up to the contractor what will happen to the trailers, Kramer said. If the entire trailer can't be saved, parts, such as metal or decking material can be salvaged and recycled, Kramer said.

"We just want to be able to come out of this without another hole in the taxpayer's pocket," Stearns said.

Although some people went out of their way to destroy things, others just abandoned their possessions -- something that's legally allowed, according to the settlement agreement, Klein said.

The conditions of the now-empty trailers varied and not all were left in ruin. One trailer on the inland side -- a light-blue 1950s-era classic -- was left nearly immaculate. Inside, the period furniture was neat and clean, complete with a bubble-gum-pink vintage Wedgewood stove and a tidy couch adorned with matching pillows.

"It all came down to how they wanted to remember their exit," Kramer said, adding that some were sweeping and cleaning up until the last moment.

For now the trailer park is off-limits to the public, although the beachfront remains open. To maintain security, state parks officers patrol the area and guard the park's gates around the clock, Kramer said.

"The stakes are pretty high, and we're not going to let down our guard," Kramer said.

Although it's not what Kramer would call "looting," people aren't complying with the "no trespassing" signs and they should know that state parks officers are enforcing it, he said.

Despite the damage, state parks said they are focused on the future of the campground and public-use project.

"It's disappointing to see the damage, [but] it's heartening to know that we have turned a corner and are ready now to start a whole new tomorrow for this stretch of beach," Stearns said.